Technology is vital for firms to exploit to extract value from the market. They integrate technology ideas into products and processes for offering better quality at a lower cost. However, it needs a disciplined approach to profit from technology potentials in a competitive market. Hence, technology management is a core capacity to profit from any product, whether we produce potato chips or silicon chips. It deals with assessing the need of making product and process enhancement, detecting, assessing, acquiring, and protecting technologies, advancing, fine tunning, and fusing acquired technologies, and integrating them with products and processes, for systematically ferreting out value from the market.

Why are smartphones getting lighter or why is the cost of milk production in Germany falling? The winning formula in the competitive market economy is about attaining the capability of offering better products at lower costs. It does not matter, whether we are in the business of producing milk, silicon chip, or lithium-ion battery. But how to address this conflicting situation? It’s through technology ideas. That is the reason more than 70 percent of American enterprises find technology as one of their top 3 priorities to face competitive challenges. Hence technology management has become a core management function. Broadly, technology management deals with the prediction, detection, acquisition, advancement, fusion, and exploitation of unfolding technology opportunities, and also dealing with threats.

On the other hand, technology ideas for improving the quality of products, lowering wastage, and reducing the resource need are our core capabilities to get our jobs done better at decreasing cost. The level of invention and exploitation of technology determines our quality of living standards. Technology is our core capability of producing increasing wealth from depleting resources to meet our growing consumption.

The purpose of technologies is for both product and process innovation

We have two main purposes to leverage technologies. The first purpose is to innovate products and keep improving them by adding new features and enhancing existing ones. We need a process to produce products. It does not matter whether we produce potato chips or silicon chips. The processing capability determines the quality of the products and the cost of production. Hence, we are giving increasing roles to technology so that production activities operate increasingly in a more effective and efficient manner. Hence, like product innovation, process innovation is also vital.

For example, the use of unmanned aerial vehicle (UAV) technology is helping us to improve the process of mapping soil fertility, crop chlorophyll contents, and precisely distributing farming inputs. This process innovation leads to reduced wastage of farming inputs and increased farming yield, as high as 20 percent. On the other hand, the innovation of the processing of silicon has been playing a key role in offering us an increasingly higher quality transistor at decreasing cost for driving the 3rd industrial revolution.

Scientific discovery leads to technological inventions. As human beings, technology emerges in primitive form. However, like living things, they are amenable to growth. The nutrient to the growth is the flow of scientific discoveries and ideas for enhancement. They also do not keep growing linearly. After crossing the infancy, technology grows exponentially. Subsequently, the growth trend suffers from maturity and starts declining. After crossing the initial phase of growth, some technologies show the potential for extracting economic value by offering better quality products at a lower cost.

Technologies that we use for process innovation are not often visible. For example, photolithography is the technology core of processing Silicon in producing transistors. Similarly, we use machine vision technologies in many production processes. The advancement and integration of these technologies empower us to improve products’ quality, reduce wastage, and lower emissions. Hence, technology is vital for us to face the challenge of offering higher quality at a lower cost.

Technologies are like waves. They form, grow, and mature, followed by the next wave. For example, vacuumed tube technology gave birth to electronics. After 40 years of journey, it reached saturation. However, human beings’ relentless urge to find a better alternative led to the transistor’s invention.

Similarly, Thomas Alpha Edison perfected carbon filament technology for light bulb innovation. At the maturity of it, tungsten filament emerged. However, by 1950, this light-producing technology-saturated. Hence, human beings went after the fluorescent for the next technology core for making light bulbs better. This journey continued leading to the invention of LED technology.

The unfolding technology waves have been continuing in all major fields. Such dynamism offers both opportunities and challenges. In certain cases, unfolding waves create the discontinuity for making a startup a giant success story, while destroying once behemoths. Hence technology management is not only limited to exploiting unfolding opportunities but also in dealing with threats.

There are seven major technology management tasks. It begins with the invention. However, not all firms are engaged in the invention. The next task is about detecting those technologies that are relevant to firms’ or countries’ business interests. Assessment and forecasting lead to the acquisition of relevant technologies. Of course, protection is important before the exploitation journey begins.

Smart firms and countries keep scanning for detecting technologies that could be of their business interest. Review of scientific literature and patent filling is one of the common practices. Some of the common practices are scanning, benchmarking, and auditing. Scanning focuses on what can be done and what is being invented. It places greater emphasis on identifying and monitoring the sources of new technologies for the industry. For example, Sony detected the invention of both transistors and electronic image sensors at the very early stage of the invention.

Not all technologies are relevant to a product or an industry. Moreover, relevance keeps changing. For example, at the very beginning, the transistor was not relevant to the automobile industry. However, it has now become a critical technology for the incremental innovation of automobiles. In fact, relevance changes from emerging to pacing, base, and key. The next phase of the assessment is about the amenability of progression for being better and cheaper. Such an assessment is vital for figuring our long-term technology strategy. It follows to determining the customer preferences of innovation around the detected technologies. Besides, it must take into consideration of technical feasibility and economic viability. Once those two tests produce positive results, the assessment proceeds to anticipated competence need and organizational suitability.

Forecasting the unfolding future is a daunting technology management challenge

Often technologies are in competition. In the race, not each of the competing technologies shows equal amenability of progression. Hence progress monitoring and forecasting play an important role. A slight error in forecasting may lead to a catastrophic consequence. For example, upon initial assessment, RCA found not much strength in transistor to replace vacuum tube technology. Similarly, Kodak found not much strength in the electronic image sensor either. Hence, both these technology behemoths showed a lukewarm response to these technologies. In contrary to it, Sony predicted bright prospects in both of them. Hence, Sony management marshaled resources for advancing those technologies and exploiting them in Radio, TV, Walkman, and Digital cameras.

For the forecasting error, both RCA and Kodak suffered from massive consequential effects. In recent times, GE made a slight error in predicting the uprising of renewable energy. Similarly, IBM lost opportunity due to errors in the prediction of personal computers. There are many more examples. Underlying science, investment race, patents, publications, and expert opinions—among others—need to be looked upon to keep mentoring and predicting the progression.

Upon selecting technologies that matter, the next technology management challenge is to acquire them. There are multiple options of technology acquisitions. Some of them are i. inhouse R&D, ii. acquiring firms and recruiting individuals, iii. licensing technologies, iv. selecting component suppliers out of preferred technologies, and v. joint venture or contract R&D with universities, R&D institutions, and partner firms. For example, upon selecting transistor and electronics image sensor technologies, Sony embarked on taking a license from Bell Labs. On the other hand, for supporting iPhone innovation, Apple acquired multitouch owning technology company FingerWorks. Apple also got into component supplying agreement with Toshiba for acquiring the HDD technology that Steve needed for iPod innovation.

Of course, protection should follow technology acquisition. There are multiple means for protection. It begins with non-disclosure and confidentially agreement to patenting. Hence, technology management practice should have a balanced approach.

Acquired technologies are primarily exploited as product and/or process features. However, there are also other means. Licensing is one of them. The exploitation phase often requires a strong in-house capability for further advancement, refinement, fine-tuning, and fusion. This is a vital competence that technology management should focus on. We all know that Apple acquired most of the important technologies from the outside. However, Apple’s in-house capability of refining them for outperforming the competition with perfection is at the core of Apple’s successes. The same reality keeps repeating from Sony to Nichia. Both of these two Japanese companies became global leaders in their areas by acquiring technologies from the outside. However, their core competence has been in-house refinement capacity. It played so vitally that R&D efforts of refinement of acquired technologies in both of these companies won Nobel Prizes.

As it has been explained, technology is the key to a profit-making journey in this globally connected market economy. Strong management practice is needed for systematically ferreting out value from the market out of technologies. However, such value extraction takes place through products and process innovation. Hence, a unified theory of innovation forms the underlying foundation of technology management. 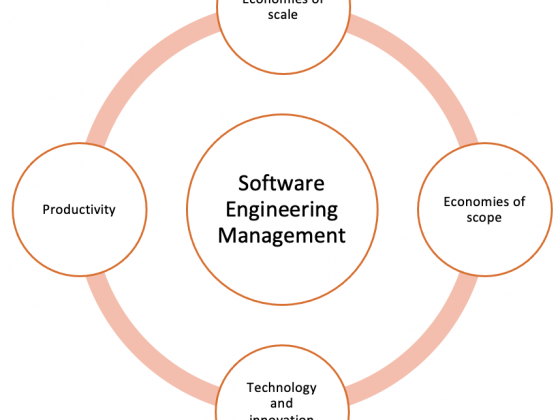 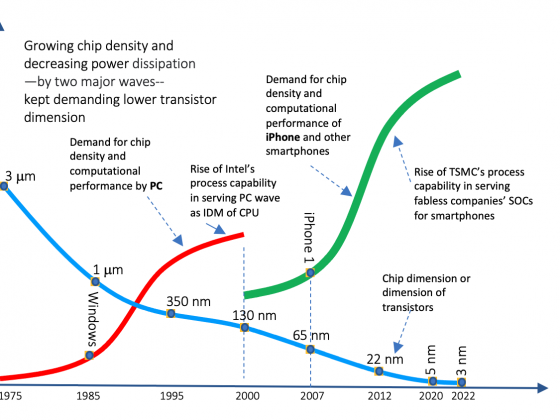 Intel Falling Due to PC and Mobile Waves 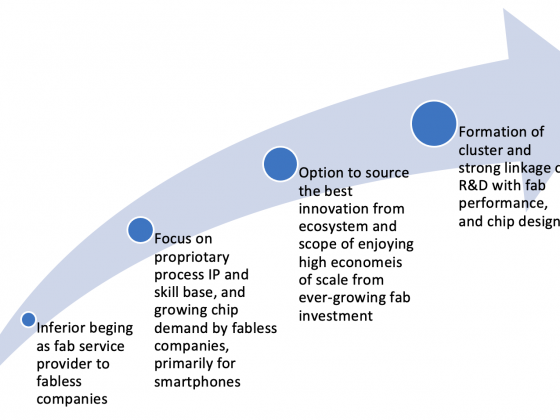 Taiwan’s Semiconductor Monopoly – How did it arise?