Digital technology transformation has been changing its role from assistive to creative destruction. Hence, unlike the past, the innovation which will unfold around digital technologies will change from incremental advancement to forming new waves. These new waves will destroy the relevance of skills, jobs, rules, regulations, and the existing ways of doing things. Instead, they will create a demand for alternatives. Hence, we should gather signals, detect patterns, and synchronize our decisions along with the transformation.

For the incremental changes, the current wave of getting things done keeps getting easier. The change is incremental; the complexity of adjustment is low; the same set of rules work; jobs do not get threatened. Hence change is welcoming. However, at the moment, technology changes the role of incremental advancement in changing the technology core, a new wave forms. Along with the growth of the new wave, the current wave starts declining. During this cross-over period, uncertainty is high; stress starts building; demand for skill, knowledge, and jobs starts changing; investment faces the threat of being wasteful; rules and regulations start showing obsolesce. In the end, the emerging wave takes over, and we find ourselves in a new way of doing things. Through this transformation, as if we migrate to a new country. But not always, though. Moreover, the time and rate of happening are highly unpredictable.

Digital technology transformation is signaling the change of the technology cores

It happens to be that digital technology emerged to bring incremental advancement in most of industrial products. It has been incremental, welcoming. However, over the last couple of decades, this technology has grown to a level to drive creative destruction in many industrial productions. So far, its role has been to provide assistance to the technology cores of products. But, in certain products, it has reached a stage to take over the role of technology cores. For example, instead of providing assistance to human drivers, digital technology transformation offers the opportunity to take over the role of a human driver altogether. At this critical time, the prediction challenge is very high, as both descending and ascending angles of the falling and rising waves are unknown. However, the signals are there. Hence, we should detect those signals in identifying patterns for developing needed foresight to make smarter decisions.

Digital technology transformation in the automobile: from automatic to self-driving

The automobile emerged as a purely mechanical machine. However, over the last 50 years, the role of digital technologies has been increasing in it. It started with simple incremental innovation, like automated window glass winding. Of course, some of those incremental steps were very high. They could be called radical improvement. For example, adaptative cruise control or variable valve timing with intelligence was radical in nature. But they did not change the need to have a human driver sitting in the driving seat and being responsible for the automobile’s functioning. Hence, automation through incremental advancement did not raise questions about jobs, business models, rules, and regulations.

However, the advancement of component technologies like sensors, computing processors, algorithms, and connectivity—among others—has been reaching a situation where digital technology transformation could be far more than incremental. Instead of helping the human drivers, innovators are targeting to delegate that role to digital technologies. Hence, it’s signaling the beginning of a new wave. Already, significant R&D activities are underway; startups and corporations alike have joined the race. Once the wave of autonomous driving reaches the inflection point, drivers’ jobs will be in question; rules and regulations guiding the past wave will be no longer relevant; the business model of car ownership or taxi service will transform.

During the cross-over period, there has been a high degree of risk leading to decision-making errors. For example, due to the anticipation of autonomous tracks arriving by 2020, American youths did not pursue a professional driving license. On the other hand, due to high hope, many investors rolled out billions. However, technology weakness has slowed down the rollout.

Airplane: from autopilot to self-flying

Like the automobile, the airplane also emerged as a purely mechanical machine. However, over the last 70 years, there has been a steady progression of digital technologies’ increasing role, leading to 1-billion-line software in Airbus A380. So far, digital technologies have been in reducing the cognitive pressure and lowering the monotonous role of a human pilot in flying aircraft. Consequentially, it has reduced the number of accident rates, and it did not keep increasing the number of pilots with the growth of the size and complexity of the air crafts.

However, digital technologies’ ongoing progress is giving the signal that the change of replacement of the pilot with software is very much a possibility. Hence, the R&D effort is progressing in starting the new wave. Even in mission-critical operations, the flying of unmanned aerial vehicles is giving the signal that the current wave of flying commercial jets will start experiencing a declining trend.

From real-time monitoring and digital medical imaging to self-diagnosis

Digital technologies have brought a long list of devices, over the last 70 years, in providing assistance to health signal monitoring, pathological testing, and medical imaging. As opposed to touching the patients or looking at the samples, physicians are looking at the data. Data produced by digital devices carry the information that physicians need to assess health and diagnose the disease. Data analytics, image processing, and pattern recognition algorithms have been progressing to take over physicians’ roles in mentally processing data. Once we reached the beginning of that curve of taking over physicians’ roles, digital technology transformation will change from incremental to creative destruction.

In education, the role of digital technology transformation also changes

Starting from the Internet, e-mail, multimedia projector, and PC all came for making incremental advancements in educational service delivery. They have been playing an assistive role in classroom-based lecture delivery. For example, both faculty members and students have been using the Internet for gathering content for enriching classroom-based sessions. Multimedia projectors or digital boards improved the productivity of lecture delivery in the classroom. However, during the pandemic, online education is giving us the signal that digital technology transformation in education has reached a point to start a new wave. Subsequently, this new wave runs the risk of causing creative destruction to the current campus-based education wave.

It seems that the progression of digital technology’s role from incremental advancement to changing the technology core is a repetitive pattern. This pattern of transformation is not limited only to industries that we have referred to here. It has been happening in many products, in many industries. Either the new wave has already started in some products, or it will start soon in some other products. To have greater clarity, we should keep gathering signals and assessing the likely starting points. Once the transformation starts, we should monitor and predict the ascending and descending angles of the two curves. However, instead of relying on past data, we should look for signals, patterns, the science of underlying technology core, and competing technologies’ progress.

In fact, digital technology transformation from incremental to creative destruction signals the transition from the third industrial revolution to the fourth one. On the one hand, the cross-over period poses a high level of uncertainty. On the other hand, opportunities are created and also destroyed during this period. Challenge is to be in sync in taking actions so that wasteful investment is minimized, and the opportunity creating investment is maximized. 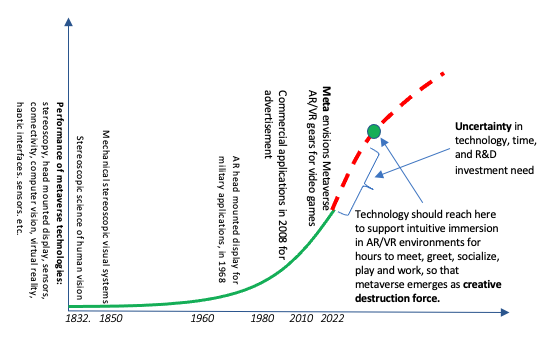 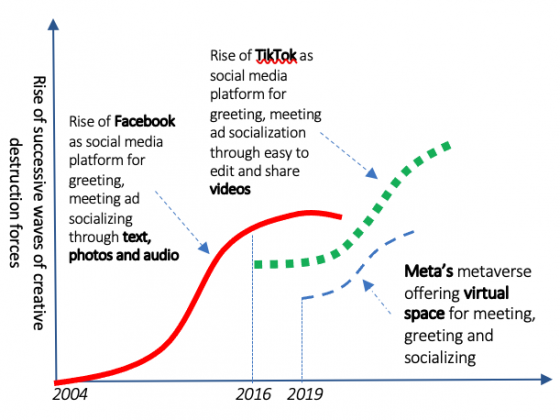