The technology adoption lifecycle is fraught with pervasive uncertainties.  After the invention, the steam engine waited for more than 1700 years for getting into the adoption lifecycle. On the other hand, Transistor and electronic image sensors took just ten years. Irrespective of the greatness, why does every technology take time for adoption by different categories of customers? Besides, why don’t all technologies take the same amount of time for adoption? Furthermore, once adoption starts, some technologies suffer from a sudden fall in expectation, from peak to trough of the hype cycle. But a few of them show opposite behavior, creating disruptive innovation effects while starting from very low expectations. Furthermore, upon reaching the peak, why does the adoption start falling?

Like living things, technologies are born in an embryonic form, keeping potential latent. In the beginning, they are fragile to support innovations. However, if we succeed in creating knowledge flow and generating ideas out of it, they keep growing. At adolescence, they start taking workload, whether contributing to incremental advancement of existing innovations or supporting the invention of new products and processes. The continued advancement of technology leads to adoption by different market segments.

Besides, some technologies qualify to help reinvention by changing the technology core. Sometimes, creative waves out of those reinventions grow as a force of destruction, often, causing disruptive innovation. By the way, some technologies emerge with considerable hope, disproportionately inflating expectations.

On the other hand, despite the emergence with meager expectations, some technologies fuel a creative wave of destruction. To exploit the full potential of technology and avoid the burn from disruptive effects, we need to manage the technology adoption lifecycle very carefully. We should also maintain a delicate balance in switching from mature technology to emerging one.

Economics of getting jobs done: a driver of the technology adoption lifecycle

For example, in the 1970s, the electronic image sensor was unsuitable for innovating cameras for civilian applications due to poor resolution. But it was a far better alternative to other means for satellite-based imaging. As opposed to dropping the film canister in the ocean, onboard electronics of the satellite could transmit images produced by electronic image sensors through a radio link. Similarly, innovators found those poor-quality image sensors quite useful for fighter jets or missiles to detect and track targets. Hence, although poor-quality image sensors had little capability to help civilians get their jobs done, military and space-born imaging applications found them quite helpful. But once the electric image sensor technology reached adulthood, innovators successfully rolled out digital cameras for civilian applications.  Hence, the adoption of technology keeps unfolding along with their lifecycle.

It happens to be that there is high contrast in the expectation about the adoption of different technologies. Many of the technologies begin the journey with high expectations, leading to sudden falls. For example, .com created massive hype in the late 1990s. The bubble burst quickly, and the expectation reached the hype cycle’s trough. But not all technologies begin the journey of adoption with hype. For example, digital cameras, transistor radio, and personal computers, among others, emerged with an intense fear of failure. Hence, many technologically sound companies ignored their emergence. For example, Xerox avoided graphical user interface; IBM paid little attention to PC; Kodak ignored the digital camera. Such a reality creates decision-making challenges for the management in adopting technologies.

Technologies are not a statistic. In the beginning, they do not offer value to all target market segments. Along with the growth of the lifecycle, they start becoming eligible to create economic value for different categories of customers.  Hence, we need to have an appropriate synchronization between the technology lifecycle and the adoption by different types of customers.

For example, in the beginning, customers having a particular need that could not be served with existing means could be the target for adoption; they are often called innovators. For example, despite the massive adoption of computer storage by civilians, the military was the customer of this technology in the beginning. At a later stage, large corporations and government agencies often become the customers. We may call them early adopters. For example, after the military, large corporations and government agencies became the customers of computers in the 1960s. The next category is the early majority. Often, small enterprises belong to this category.

Often, the technology advancement gap in serving two successive customer groups is quite large. In addition to inflated expectations, such a large gap creates a chasm in the technology adoption lifecycle. For example, with high-level imperfections, autonomous war machines are good enough to create attractive value for the innovator category—the military. Such early adoption of autonomous vehicles inflated the expectation of its imminent diffusion through other market segments. But the reality has been posing a high barrier to technology advancement for making autonomous vehicles suitable for different segments. Hence, it has been caught in the chasm. Similarly, many AI applications are also caught in the chasm.

To qualify for the adoption by the successive market segments, from military to civilians, technology should be amenable to progression to improve the quality and reduce the cost of innovations. In the absence of this ability, time alone has little to contribute to the adoption. For example, the adoption of fuel cell-based electric vehicles is stuck. On the other hand, the adoption of lithium-ion-based EVs has been making rapid progress. This is because the lithium-ion battery pack is doing far better than fuel cells in quality advancement and cost reduction.

Similarly, the adoption of digital cameras rapidly progressed due to the strength of the underlying processing technology. They are many such examples. For example, the adoption of automobiles, mobile handsets, and television has been progressing due to steady progress in quality and cost reduction. Technology progression results in progressive adoption.

Externalities in the form of infrastructure, 3rd party component plugins, and standardization, among others, play an essential role in adopting technologies. Furthermore, in each category of customers, there are several sub-segments. Innovations around candidate technologies targeting the unique aspects of those segments contribute to the adoption. Furthermore, successive versions with the addition and advancement of features also contribute to adopting technologies deeper in society, forming wavelets of diffusion.

Technology adoption lifecycle slowdown at maturity and goes through transition:

In the long adoption lifecycle, even lasting over a century, all technologies reach maturity. Due to declining progress in quality and cost, the improvement in adoption slows down. Fortunately, the human race has succeeded in inventing alternative technology cores. Over time, customers start switching from mature technologies to emerging ones. For example, the adoption of imaging solutions switched from film to digital cameras. Similarly, people have already begun to switch from gasoline to electric vehicles. Often, such a switching causes significant challenges due to the creative destruction effects. In certain instances, this effect leads to disruptive innovation effects. In a nutshell, the technology adoption lifecycle demands strong management capability. 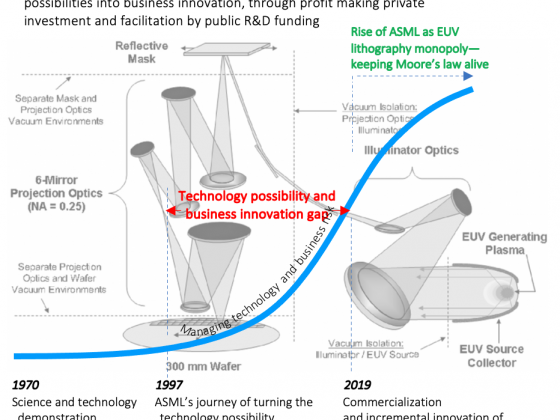