Economic prosperity has been at the core of organizing our production activities. In a command economy, decision-making is centralized. The government decides what goods and services will be produced and what prices will be charged for them. In contrary to it, the market economy relies on freedom of decision-making of individual producers and consumers. As opposed to the government, private enterprises take the role of production. Consumption is influenced by the perceived value and the price of available products. It has been found that the market economy offers higher prosperity than the command-driven one. Competition for pursuing innovative ideas is the main reason underlying this success.

What is the source of ideas? How do innovative ideas shape the market economy and vice-versa? Moreover, why does not every country pursuing market economy principles enjoys similar prosperity is intriguing. Answers to such questions help us take measures to drive economic prosperity.

Consumers and producers are raising their self-interests: conflicting agenda

Human beings are driven by selfish interests. The free market economy offers the promise to tap into it to offer us an increasingly better-quality life. There is freedom of production and consumption. In fact, at the core of the free market, the economy is entrepreneurship. The economic incentive is at the core of consumption and production. Hence, consumers are after utility maximization from the consumption of goods and services. For extracting utility, they are after finding and deploying products to get their jobs done.

Therefore, they are looking for better products at less cost for extracting more utility. For the growing prosperity or improving quality of living standards, their desire to get increasingly better products at decreasing cost is endless. On the other hand, producers are after making a profit in offering those products. These characteristics of consumers and producers appear to be human beings’ inherent attributes. That means economic incentives being asked by consumers and producers are raising conflicting agendas.

As Adam Smith observed, “rational self-interest in a free-market economy leads to economic well-being.” As mentioned before, consumers demand the offering of increasingly better products at decreasing costs for improving living standards. In meeting this objective, we need to offer increasing profit-making opportunities to producers. These two objectives pose a conflicting agenda. Indeed, this is a core challenge of the market economy. However, human beings tend to recreate existing products and methods of production and create new products and production methods to maximize utility. Carl Marx uses the term “praxis” to articulate this observation. It refers to “the free, universal, creative and self-creative activity through which man creates and changes his historical world and himself.” Such observations are also found to keep reoccurring in ancient philosophical writings. This inherent characteristic appears to be at the core of entrepreneurship of a free society.

The flow of Ideas fuels entrepreneurship for recreation and innovation

To recreate existing products and processes and innovate new ones, for getting the jobs done better at less cost, entrepreneurs need ideas to profit from. Upon accessing those ideas, they start marshaling resources to keep fueling the journey to bring those ideas in the form of better products, preferably at lower prices, to the market. But invariably, those products show up in primitive form, creating very little or no appeal to customers of incumbent products. They need a flow of ideas to keep improving them and lowering the cost of production. Unlike the past, intuition, experience, or common sense-based ideas are not sufficient to profit from the idea of recreating existing products or innovating new ones. Such ideas neither have high-value creation capability nor are they scalable to keep improving.

As a penetration strategy, entrepreneurs pursuing innovative ideas target non-consumption for those primitive products. According to Clayton Christenson, non-consumption comprises those customers who badly need incumbent products. Yet, they cannot consume them for several reasons, including cost, limited availability, infrastructure limitation, or technical complexity. With the support of the flow of additional ideas, entrepreneurs keep upgrading their products around the new technology core. Eventually, some of them succeed in making their alternative offerings better substitutes for existing products. Finally, customers of incumbent products around matured technology core start switching to emerging alternatives.

Switching to substitution cause creative destruction

This switching causes destructions to existing products, and the production processes to produce them. This effect is termed creative destruction by Prof. Joseph Schumpeter. By the way, the journey of alternative products around new technology core creates a larger market. First, they transfer non-consumption to demand. Subsequently, the continued growth for being a better and less costly substitute to existing products leads to penetration to the incumbent products’ market. This process expands the market by enabling many more customers to extract utility from deployment or consumption of the better alternative. As a result, the quality of living standards of society increases due to the creative destruction pursued by entrepreneurship in the free market economy.

But this process does not sufficiently address the issue of “accumulation and annihilation of wealth under capitalism.” Creative destruction does not always mean to be the loss of existing jobs and firms. There is a freedom of switching for incumbent producers from existing products around matured technology core to newly emerging ones. If they succeed in making the switch at the right movement neither jobs nor firms suffer from destruction. At this juncture, Prof. Clayton’s observations shed light. He observed that often emerging products keep producing loss-making revenue for a long time. Entrepreneurs or startups keep pursuing it to create a success story. They also demand new business models, supply chains, and other complementary assets.

On the contrary, matured products around existing technology core keep producing profitable revenue. This reality often creates a decision dilemma for incumbent firms. Often dominant firms either avoid or be very late action of making the switch. As a result, at the juncture of the two waves, the disruption takes place. While emerging products start taking over the existing ones, invariably, incumbent firms fail to switch. Consequentially, they suffer from loss of demand for their existing products, jobs, and share value. Prof. Clayton termed this phenomenon as “Disruptive Innovation.” Due to this effect, monopoly tumbles and accumulated wealth suffer from annihilation due to the rising next wave of innovation. However, the uprising of creative destruction waves does not always cause disruption to incumbent firms, and industries.

Incumbent dominant firms do not always fail to switch

But if incumbent firms, which have established dominance by capitalizing on matured technology, succeed in switching to new the new wave of innovations, being propelled by emerging technology core, monopoly does not tumbles resulting in the prevention of annihilation of wealth under capitalism. On the other hand, if entrepreneurs do not get a sufficient flow of ideas from the advancement of knowledge, the force of creative destruction fails to gather enough momentum to succeed in offering better alternatives at decreasing cost. Such reality demands a strong role of public policies related to science and ethnology. In the absence of the flow of knowledge and ideas, the freedom to pursue entrepreneurship does not lead to profit-making opportunities for offering better products at a lower cost to more customers. Subsequently, the progression of living standards will slow down, and wealth will remain accumulated in the hands of a few.

Therefore, there is a strong relevance of public policies supporting R & D to advance knowledge and ideas and make them accessible to entrepreneurs to pursue one after another wave of creative destruction. This is vital for improving our living standards and the destruction of wealth accumulation. Otherwise, praxis and entrepreneurship cannot progress to empower the free market to keep offering us continued prosperity. In retrospect, Prof. Vannevar Bush’s argument of increasing public funds, particularly in university-based R & D, played a vital role. In fact, subsequent policies created the needed flow of knowledge and ideas for empowering capitalism to succeed in America.

Even Steve Jobs’ magical successes in innovation leveraged the knowledge and ideas created by the US public policy for science and technology. In fact, adherence to this US’s S&T policy by major free-market economy promoters also scaled up the success of the USA’s market economy. As a result, USA-led western countries kept experiencing increasing prosperity for the following capitalism. On the other hand, due to the weak role of public investment in R&D for increasing the supply of knowledge and ideas, grassroots ideas in developing countries are failing to grow in creating large-scale economic outputs.

Hence, many countries with weak or non-existent R&D facilities are failing to produce economic outputs from ideas. Moreover, these countries are busy increasing the supply of objects, as opposed to ideas, to drive their economic growth. Perhaps, how innovative ideas shape the market economy is not clear to their planners. Consequentially, they have been suffering from weak economic health and poor standards of living.

Before Romer’s observation, the effect of ideas, distilled from science and technology progression, was observed in economic growth. Prof. Solow’s analysis revealed a component of economic growth, which was not due to labor and capital. He observed it as a residual effect and named as Total Factory Productivity (TFP). Such observation of the role of S&T and ideas as residual effect fell short in explaining key issues. Particularly, unfolding technology innovation dynamics remained unclear. Consequently, we failed to get levers to drive growth and prosperity from the flow of S&T knowledge and ideas.

The natural tendency of monopoly is on the rise

Hence, Prof. John Tirole’s work on the theory of industrial organization appears to be relevant. The ever-expanding reach of digitalization, gradually encompassing the whole sphere of economy, demands us to blend principles of free-market with regulation to govern economic growth and social welfare out of ideas.

The trade-off between quality and cost is often not needed

The role of ideas in the age of digitization and machine intelligence is increasingly offering us the opportunity of offering better products at a lower cost simultaneously. As a result, Michel Porter’s theory of competitiveness based on higher quality or lower cost, as opposed to offering both, is increasingly losing relevance.

To sum up, this brief write-up is an attempt to create a seamless flow of thoughts for explaining the role of innovative ideas in the offering of prosperity in the market economy. This flow has touched upon the thesis and acts of the 10 most well-known personalities in the modern economic sphere. But the objective was nether to relate or review their works. Rather, this flow found those references relevant in connecting dots in clarifying how innovative ideas shape the market economy. 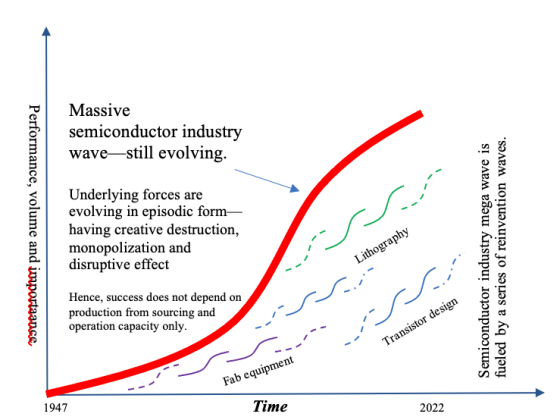