In 1946, Sony started the journey in the wreckage of a bombed building in Tokyo with 08 employees. but this humble beginning offers valuable lessons for startup, innovation and idea economy.

Soon after, in 1948, the Transistor was invented in the American Bell labs. Sony’s leadership envisioned possibilities in this invention.In 1952, Sony’s co-founder Masaru Ibuka boarded a jetliner to reach the USA for getting first-hand knowledge about the recent invention-Transistor.

Unlike others, Sony’s founders saw latent potential in the primitive emergence of Transistor

Like many other great technologies, Transistor also emerged in primitive form. It’s potential was so latent that even American icons like RCA did not see much future prospects in it. But Mr. Ibuka and his colleague Mr. Morita envisioned possibilities. Soon after, tiny Sony moved to take the license of the Transistor–for its production and refinement.

Sony started the commercialization of this technology with the release of compact Transistor Radio–TR-55–in 1955. But this radio was extremely primitive–producing very low, cranky sound.

As opposed to just making and using the transistor, Sony embarked on its refinement for improving the quality and reducing the cost out of knowledge discovery and invention of a flow of ideas. The speed of the refinement exceeded the progress of its American and European counterparts. Hence, Sony succeeded in outperforming even dominant American and European players in Radio, TV, and Audio recorders. Among others, the story of Walkman is known to us. In addition to technology edge, Sony also pursued the strategy of growing from below by serving non-consumption.

Sony’s this technology refinement based progress was so much as that one of its R&D team members received Nobel Prize in 1974.

Sony Developed a Model and Repeated It

Sony repeated this model of creating enormous success story through refinement of licensed or borrowed technologies. One of the notable ones has been in CCD or electronic image sensor. This journey not only made Kodak bankrupt, but also, still to date, Sony has been the dominant supplier of high-end image sensor for iPhone and many others. Another example is Sony’s contribution in seeding the journey of lithium-ion battery–leading to creating business success and winning Nobel Prize for Japan.

Lessons from Sony’s Journey for startup, innovation and idea economy

Here are lessons: 1. Detect the latent potential of technology inventions that is taking place all around the world, 2. Get into the innovation race at the early stage of development of technology core, 3. As opposed to increasing the sale out of subsidies, focus on technology refinement for making the innovation increasingly better and also cheaper out of scientific discovery and flow of ideas, 4. Get a deep dive in technology refinement, even leading to winning Nobel Prize, 5. Focus on the speed of advancement for outperforming the competition, 6. Pursue an appropriate model to grow from beneath as opposed to get into head-on competition, and 7. Develop a model of it and keep repeating.

Moreover, Sony’s this journey opened the entry for Japan into the world of modern electronics and semiconductor technologies. As we all know, still today, Japan has dominant roles in the global high-tech value chain, starting from semiconductor processing equipment, solid-state memory, LCD display, LED light bulbs to lithium-battery.

Of course, after the departure of its founders like Mr. Morita and Mr. Ibuka, Sony has lost the capability of repeating the model that Sony developed during 1950-1990. But, Sony’s journey over this period offers us highly valuable lessons to create innovation and startup success stories and opened the door of the idea economy. 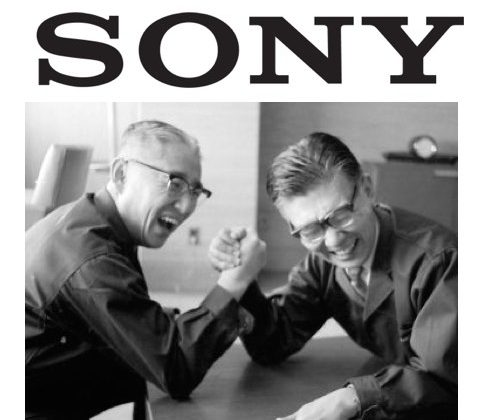