A Scottish engineer invented the Television, but British people import their TV sets. Similarly, inventions like the camera, LCD, battery, and many more have migrated from the USA to Japan. Consequentially, likely based on a misinterpretation of the root cause, it has caused serious policy intervention to make America great again. Such reality underscores the fact that innovation epicenters of inventions keep migrating. But what is the underlying force? Is it because inventing countries lose interest or less developed countries leverage lower labor cost advantage or infringement of patents?  Contrary to common belief, inventions migrate across the boundaries of firms and nations due to reinvention. It occurs due to changes in the technology cores of matured products by emerging ones. In retrospect, the reinvention effect is a force of creation, destruction and migration.

Technology cores fuel product invention. For example, the invention of the internal combustion engine led to the automobile invention. Similarly, battery invention emerged due to the invention of chemical reaction forming ions. Other examples include light bulbs, books, television, the computer, and many more.

In retrospect, technological inventions take place in an embryonic form. Hence, product inventions also emerge in primitive conditions. For example, Carl Benz’s automobile invention using an internal combustion engine appeared in rudimentary form; in the beginning, it was even inferior to horse wagons. But technologies are amenable to progression, making them better performing and cheaper. It happens due to the creation of a flow of ideas generated from gathering additional knowledge and urgency. Due to it, invented products also progress.

Of course, all products do not keep progressing at the same rate, as underlying technologies are not equally amenable to progression. But invariably, all technologies suffer from slow growth, reaching the state of saturation or maturity. Hence, invented products also reach a state of maturity. Of course, it takes time, varying from decades to even a century. For example, after having steady incremental progression, automobile invention started showing signs of maturity after 100 years of its invention.

The continued growth in performance of the technology core is the underlying reason for the gradual expansion of diffusion of inventions—creating an increasingly more significant market. Due to it, although more or less all inventions suffer from lack of or no customers at birth, they keep finding a growing number of customers along with their maturity. For example, Edison did not find customers to generate profitable revenue for its notable inventions like light bulbs and the Phonograph. Hence, he embarked on incremental progression, making it better and also cheaper to produce. But such growth slows down at the maturity of the technology core—necessitating the change of the technology core.

At the maturity of the current wave of products, if the emerging technology core is strong enough, the reinvention wave begins. Invariably, it starts in primitive form, offering poorer quality at a high cost. But for being a creative wave of destruction, it should have unique attributes. Furthermore, the technology core should be amenable enough to keep improving the primitive emergence, making it a superior alternative.

For example, PC-based word processor in the early 1980s was primitive and inferior to an electronic typewriter, particularly due to poor printing quality. But it had unique features of ease of editing. Over time, low-resolution dot-matrix printers grew as high-resolution inkjet and laser printers. Furthermore, the continued addition of features and upgrading of the text-based interface to graphics made PC-based word processing a better alternative, turning it into a creative wave of destruction. Similarly, digital cameras, transistor-based radios, or LED light bulbs also emerged in primitive forms. The reinvention wave of the automobile as the electric vehicle has been struggling to grow as a creative wave of destruction to gasoline vehicles. Similarly, autonomous vehicles are showing signs of being creative in the destruction of human driving of automobiles.

As matured wave offers profitable revenue, often incumbent firms are reluctant to pursue loss-making beginning of the reinvention wave. On the other hand, new entrants are desperate to make an entry. Hence, often, reinvention waves are led by startups. Yes, new entrants struggle to create a market for inferior substitution products. Therefore, they face intense pressure to make risky R&D investments and mobilize risk capital. But in some instances, they succeed in growing primitive reinvention waves as better and cheaper alternatives to mature products. For example, word processors became a better alternative to typewriters, and mobile phones grew as better performers than landline phones. There have been countless such examples, causing a disruptive effect on firms and industries producing matured products. As a result, reinvention causes migration of innovation epicenter across the boundaries of firms and nations.

Reinvention is our means of creating a new growth path for matured products. But as reinvention around emerging technology core shows up in primitive form, an inferior alternative to existing matured products, incumbent firms show reluctance to drive the reinvention wave. But due to the scalability of the underlying technology core, sometimes, reinvention waves grow as supportive alternatives to matured products. Consequentially, incumbent firms and jobs suffer from destructive effects. Furthermore, invention epicenters migrate from once high-performing incumbent firms to new entrants. Sometimes, those new entrants are located in different countries. As a result, due to reinvention, migration occurs not only across the boundaries of the firms but also nations—making the rise and fall of firms and countries.  Hence, the reinvention effect is a force of creation, destruction, and migration—causing revolutionary effects. 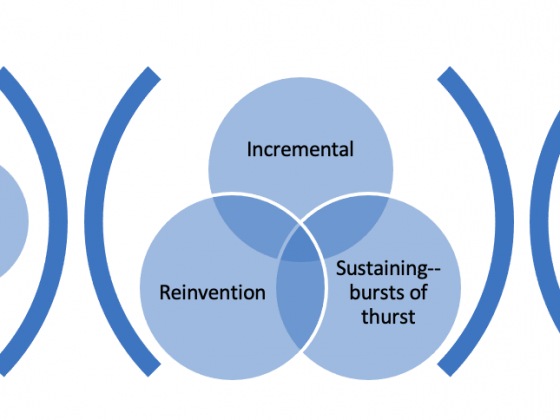