After Good to Great, Jim Collins came up with Great by Choice. Amid the uncertainty, even chaos, how companies show 10X performance is the question he attempted to answer. He used data and referred to case studies to enumerate the principles for building an outstanding enterprise in unpredictable and fast-moving times. But the thesis failed to interpret why do some companies fail to keep sustaining 10x performance. What is the underlying reason why once role model of Great by Choice becomes an example of doom?

Mr. Collings to the ability to scale innovation by blending creativity with discipline in building great companies. His research finds that the leadership of 10X companies make better use of the luck they get. Although we favor speed, Great by Choice research found that 10X leaders know better than others when to go fast and when not to. Furthermore, he discovered that successful leaders are not necessarily bold, risk-seeking visionaries. Instead, they are more disciplined, more empirical, and more paranoid. But Jim Collins did not explain how leaders begin the journey and pursue it. Furthermore, he did not relate his findings with the innovation dynamics, and the role of technology maturity.

Underlying patterns of Great by Choice

In pursuit of finding the answer to how leaders succeed in building great companies, The WAVES finds that they do so by pursuing a loss-making alternative. Contrary to keep building flywheel effect for making Good companies Great, leaders succeeding in building 10X companies embark on reinvention. Often such a loss-making path is preferred by new entrants, disrupting once high-performing firms. But Jim Collins did not refer to such a reality. As a result, his finding falls short in pointing to underlying patterns and rationales in decision-making.

But that does not mean that Jim Collins’ conclusions are irrelevant. Instead, the study of the reinvention dynamics spells out the underlying causes of some of the principles he has developed. Insights about those underlying causes will shed further light on how to pursue Great by Choice. Ironically, the journey begins with giving up profit-making incumbent products to pursue a loss-making alternative. Let’s look into it further.

Questions from the example 10X companies

10x refers to the appreciation of stock price by a factor of 10 over a certain period, say ten years. Hence, Apple and Tesla are great examples. Similarly, once Intel, Microsoft, and Sony were Great by Choice examples.

Over the last ten years, from 2012-to 2022, Tesla’s stock price appreciated from less than $6 to over $1000. Similarly, Apple’s stock price rose from $15 to $175. In a specific decade, Intel and Microsoft also experienced similar performance. But why did Tesla’s stock price remain virtually stagnant from 2010-to 2019? Upon showing 10X performance, why was Apple on the verge of facing bankruptcy? Similarly, upon appreciating from $0.37 in 1991 to $72 in 2000, why is Intel’s stock virtually stuck? Such a reality indicates that the same company, for a certain period, showing 10x performance is failing to keep continuing. Hence, some of the principles Jim Collins have come up with do not explain the turbulence performance of once role models of Great by Choice companies.

Great by Choice out of reinvention begins the Journey at Loss

The root of showing 10X performance is pursuing the reinvention of existing products. Ironically, reinvented products begin the journey in an inferior form and generate loss-making revenue. For example, Tesla has been after the reinvention of automobiles. But its electric vehicle emerged as an inferior and costlier alternative. Similarly, the Personal computer emerged as an alternative to Minicomputer. Likewise, digital cameras, smartphones, transistor radio, LED light bulbs, and others debuted as inferior alternatives to incumbent mature products.

Furthermore, invariably, all those reinventions started to produce loss-making revenue. And stock price of those companies remained stagnant for years. Surprisingly, they grew as a better, even cheaper alternative to their once superior counterparts. As a result, revenue, profit, and stock price grew, often more than 10X over ten years.

Scaling up challenges in Great by Choice options

Jim Collins is very right in pointing to the necessity to scale up the Choice. In our finding, this Choice of the technology core for reinventing mature products. For example, Sony chose Transistor to reinvent Radio, Television, and many other consumer electronics products; Apple chose multitouch user interface to reinvent smartphones; Tesla opted for the battery to get an electric vehicle. But how to scale up so that as the production of reinvented products ramps up, the loss keeps falling. Unfortunately, the reinvented alternatives have the opposite natural tendency.

For example, as Tesla ramps up production, the total loss grows. All the highly hailed Great by Choice companies faced the same situation at the early stage of the lifecycle of their reinvented products. The core challenge of scalability is to keep generating and adding ideas for making reinvented products increasingly better and cheaper. The underlying technology core should be amenable to progression to make it happen. For leveraging, it demands systematic R&D. From this perspective, Jim Collins’ finding of the need for a disciplined approach is highly correct.

As explained, reinventions out of emerging technology core debut as inferior alternatives. For example, Tesla’s electric vehicle, digital camera, and personal computers, among others, started the journey at a loss. Even Apple’s iPhone and Carl Benz’s automobile began the journey at a loss. Innovators need to keep ideas in creating the flywheel effect to turn that loss into profit. Hence, it demands a systematic discipline of digging down science and turning it into a flow of ideas. As a result, reinvention waves keep growing, reaching the inflection point of causing creative destruction. No Great by Choice unfolds as a 10x success story in its absence. For this reason, Apple, Intel, Microsoft, Tesla, Sony, and many more have been focusing on keep releasing better versions of their reinvented products.

As great by Choice begins the journey with a loss-making alternative, management faces a decision-making dilemma. Due to it, sometimes, great companies fail to leverage their luck. For example, after getting the first patent for a digital camera, Kodak did not pursue it. Likewise, upon hitting a personal computer, IBM gave away the processor to Intel and the operating system to Microsoft. Similarly, Xerox threw away the graphical user interface technology. On the other hand, Apple, Intel, Microsoft, Sony, and many other companies became 10X performers because IBM, Kodak, and Xerox chose not to pursue those opportunities. Ironically, subsequently, some of them, like Kodak and IBM, suffered from the destructive effects—known as the Kodak moment.

Technology plays a vital role at the core of showing 10X performance out of Great by Choice. If technology is not available, any amount of luck, disciplined approach and any other management charisma will not show 10X performance. Unfortunately, Jim Collins failed to highlight the importance of this attribute.

For sure, 10X performance depends on management’s Choice. In retrospect, Great by Choice is about the reinvention of existing profit-making mature products. Ironically, the journey of Great by Choice begins at a loss. If the technology core is suitable, a disciplined approach in creating the flywheel effect keeps growing new waves, showing 10X performance gain. Hence, it’s not about just luck and risk-taking. Instead, Great by Choice is about pursuing reinvention opportunities through a disciplined approach for turning loss-making alternatives into 10X superior performance. 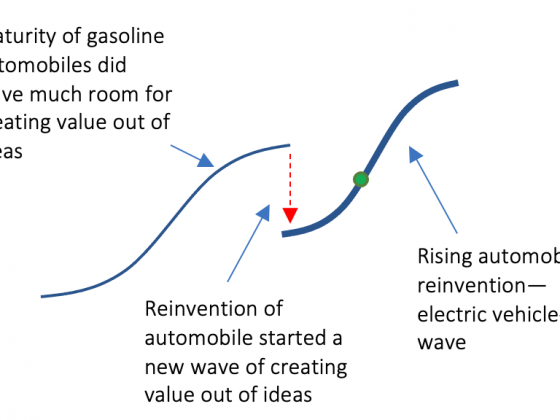